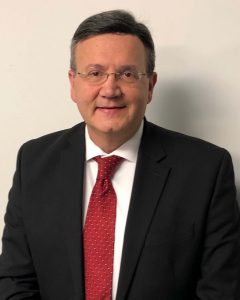 Captain Brown has spent the last 20+ years directly involved in advancing aviation safety. The Secretary of Transportation appointed him as Chairman of the Lithium Battery Air Safety Advisory Committee. In this role, he is leading a collaborative process between manufacturers, e-commerce platforms, airlines, and other industry stakeholders in providing recommendations to the DOT and Congress on safely transporting batteries on aircraft.

Captain Brown also serves as Chairman of the IPA Safety Task Force (STF). This group has developed significant mitigation strategies for addressing smoke, fire and fume events on aircraft. The STF continues to innovate novel solutions to mitigate the risk of lithium battery fires on aircraft and identify counterfeit products in the supply chain. Captain Brown’s efforts has led to speaking opportunities in the United States, Canada, Europe, China, Singapore and Japan. He has also conducted briefings for House and Senate Staff and members of Congress on safety mitigation strategies.

As a member of the Independent Pilots Association (IPA), he has served as Communication Chairman, Safety Chairman, Director of Airline Safety & Training and IPA Executive Board Vice President.

Apart from aviation interests, he serves on the Advisory Board for Opals Dream Foundation, a charity he helped form in 2011. This organization seeks to enrich the lives of people in long-term care facilities by meeting their physical, emotional, or spiritual needs.

Captain Brown holds a Bachelor of Arts in Communication from the University of Wisconsin-Milwaukee, and currently resides in Louisville, KY.