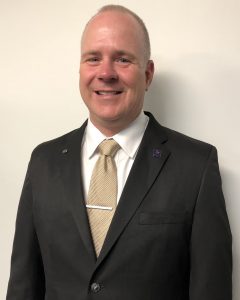 He was hired by American Airlines in 2000, is based at Miami International Airport (MIA) on the Boeing 737 flying both domestic and international routes.

Captain Benton is a retired Lieutenant Colonel in the U.S. Air Force’s Air National Guard for the State of Oklahoma. Having served more than 25 years in the Air Force, he is a command pilot with over 4,000 hours in the C-130 and KC-135. He was an instructor and evaluator pilot in both aircraft and has spent more than 750 days deployed in support of conflicts in Bosnia, Afghanistan, and Iraq.

Captain Benton graduated from Southeastern Oklahoma State University in 1992 with a Bachelor of Science degree in aeronautics. He is a Certified Flight Instructor (CFI) as well as an Advanced Ground, Instrument and Multi-Engine Instructor.

His hobbies include flying gliders. (Commercial certificate).  He and his wife, Bridget, have two children, Nathan and Ashlynn Marie and reside in Mustang, Oklahoma.